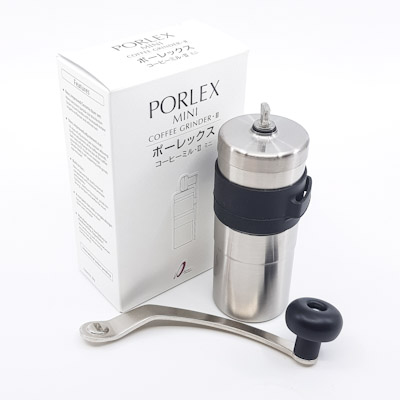 The Porlex mini II hand grinder is our go-to grinder when we’re away from the cafe.

It’s small, light, almost indestructible, and (best of all) it fits right inside your Aeropress.

What’s not to love about that?


With its newly designed burr set, the Porlex II can grind beans easier, faster, and more evenly. This results in less fines, less boulders, and more even grounds. Compared to the Porlex I, this grinder can produce roughly 1.3 times more coffee with the same number of rotations. There is no need to worry about the top of the grinder rolling away like a boulder in Indiana Jones – Porlex has redesigned the adjustment nut so that it stands up proud and tall on its own!

With the new burr, the per click adjustment changes an average of 37 microns – meaning you can further dial in your Hario V60 recipe. Made in Japan with higher quality materials than its predecessor, the Porlex II punches above its weight – scaring its rivals back to their grinder travel pouch caves.

As with its bigger brother, the Porlex Tall, this grinder has ceramic burrs and a stainless steel housing, which not only makes it easy to clean, but more resilient than glass versions, and produces less static than plastic versions.

New and Improved Ceramic Burr Set
Made of Higher Quality Materials than Porlex I
Made in Porlex’s Kirishima City, Kagoshima Factory in Japan
Grinds Faster, Easier, and More Evenly than Porlex I
Ceramic Burrs do not Absorb Water, Smells, and Will Not Rust
Each Click Will Make an approximately 37 Micron Change
Slim, simple design is very portable and will fit in an AeroPress
22g Approximate Capacity


All brew gear and supplies