Welcome to the first of the fresh harvests from Ethiopia!

Reuben visited Ethiopia at the end of last year, visiting farms and washing stations, along with the ECX (Ethiopian Coffee Exchange) where coffee crops are traded.

Ethiopia’s the birthplace of coffee, and the coffee you’re drinking is Ethiopian Heirloom varietal, which is a mix of the naturally-occuring varietals of the region. If you look closely at the beans you’ll possibly notice more variation in the size than with other single origins, which are quite often a single varietal.

It’s not surprising that a country like Ethiopia also has long and rich traditions around drinking coffee, and their coffee ceremony is the perfect example. Here’s a photo of coffee being prepared during Reuben’s visit:

Much like here, coffee has a strong element of social bonding to it: the ceremony is about getting people together to talk.

Unlike here, they start with green beans and roast them right before brewing (we recommend giving our beans at least three days between roasting and brewing). They’re typically roasted in a frying pan over a flame, and often carried around afterwards to help cool the beans and also share the aromas with others nearby.

After grinding the beans in a mortar and pestle, they’re brewed in an unusual vessel: a long-necked ceramic kettle called a jebena. When the coffee boils up through the top of the container, it’s poured in and out of another container to cool it, then back into the jebena for serving. 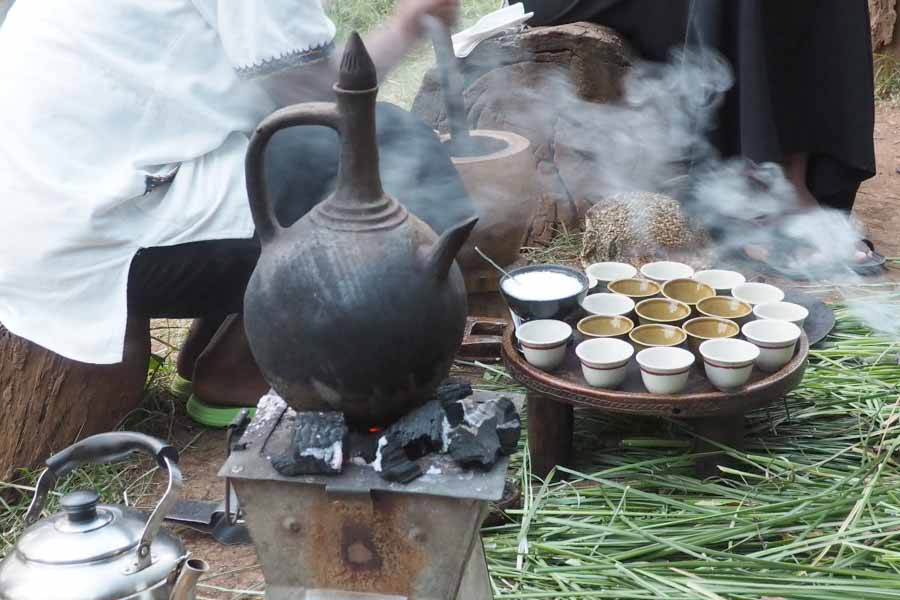 Small serving cups without handles are arranged on a tray, and the coffee is served in a continuous pour from cup to cup until they’ll all full. Traditionally the youngest child of the family will serve the coffees, with the eldest person in the room served first.

This is repeated with the same coffee grounds three times by adding fresh water: the first is called Arbol in Amharic, followed by the second,Tona, and finally the Bereka, which is also considered to be a blessing.

The way coffee is roasted and served in Ethiopia means this coffee is typically dark and bitter compared to the lighter roast that you’re drinking, so it’s also usually sweetened with sugar.

And now, some jazz

One other indelible side to Ethiopia is their vibrant live jazz scene: it's one of Reuben’s highlights from the visit last year.

This 45-minute mix comes from MogaDisco, a group of four collectors of African music, and gives you a taste of the range of music coming out of Ethiopia.

What makes up Ethiopia Beriti?

The Ethiopian Heirloom name is used to describe indigenous heirloom varieties resulting from cross-breeding between species and varietals rather than stemming from one particular variety.

The Yirgacheffe region of Ethiopia

Unique for its floral and highly aromatic coffees. Some our of very favourite and memorable Ethiopian coffees have emerged from this legendary region.

Absolute stunner. Really getting the orange notes. Loving this one.