Juan Carlos Manueles Ventura’s farm is located in La Paz, one of the highest and coldest parts of the Honduras, near to the border with El Salvador.

For Juan Carlos, his wife and two children, the farm represents their livelihood. It also contributes to the economy of the community employing 12 to 15 neighbouring families to help with maintenance, picking, hauling and processing of coffee.

Thanks to coffee, Juan Carlos is able to send his son to study agronomy, continuing the family tradition. 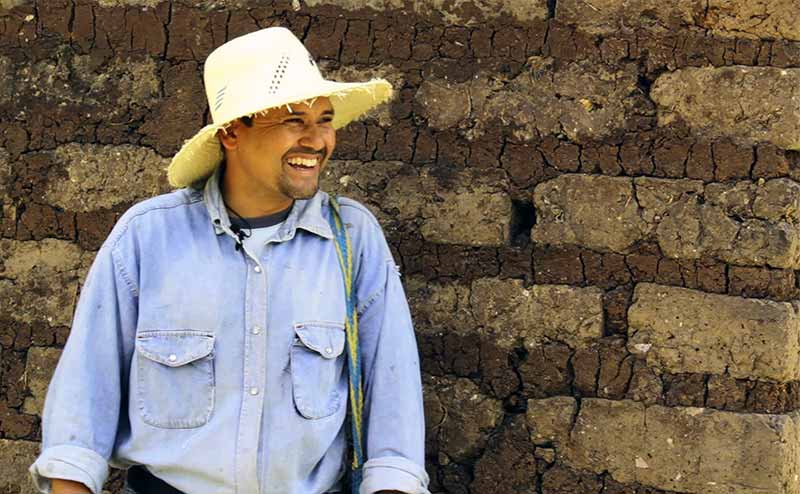 Juan Carlos’s focus on quality has seen his farm twice awarded in the Honduras Cup of Excellence awards, which recognises coffees which score 85 points and above out of 100 in tastings by both a national and international jury. His harvest of Pache (the varietal we’re sharing with you) placed 27th in 2015. In 2016 his crop placed 21st in a much smaller field, and earned a 120% premium on the auction price from the previous year’s crop.

This coffee is a relatively unusual varietal called Pache. It’s a dwarf mutation of the typica varietal, which we’ve previously only featured alongside Catuai and Cattura in the Guatemala La Idolia.

Juan Carlos is dedicated to taking care at every stage of the production process.

Coffee is fermented for 36 hours before being washed with clean water from a local spring. It’s first dried on open-air screens (you can see one behind Juan Carlos in the top photo) before being moved to the raised beds, under cover, aiming for slow drying of 17–20 days to completion.

Juan Carlos says that caring for his farm means keeping it free from weeds, performing a selective picking and leaving in the trees the green beans and using only the mature.

In Honduras, 92% of coffee production comes from small producers, such as Juan Carlos, who traditionally have picked and de-pulped their own coffee and then sold wet parchment to Coyotes, who buy from the farm gate in exchange for cash. This is the quickest way for a producer to receive money for their crop. This coffee then goes to large-scale mills to be exported as commercial grade bulk lots.

However, Juan Carlos and the other small producers we work with are part of a new movement of farmers who are processing and drying their own coffee.

This new group of producers is pursuing quality and together they are aiming to increase the volume of ‘Specialty Grade’ coffee exported from the country, which currently sits at just one percent. These farmers are being encouraged to invest in taking care of their washing tanks and de-pulping equipment, and building their own raised drying beds, all of which continue to improve quality.

We’re really excited to be a part of this new era of coffee production in Honduras, and to share the coffee and stories of these small farmers and their families with you.

What makes up Honduras Yire?

Pache is a natural mutation of Typica, originally discovered in Guatemala in farms of El Brito, Santa Cruz Naranjo and Santa Rosa.

The largest producer of coffee in Central America and one of our favourite coffee producing nations, capable of producing fruit driven coffees with a great, vibrant acidity.